Belgrade is full of famous and interesting churches, monasteries and places of worship of different confessions to visit and admire.

In the Belgrade area and its surroundings it is possible to see lots of monasteries built at the end of the XV century or later, demolished and rebuilt several times, and mostly renewed in recent years. There are also several Roman Catholic churches, one synagogue, one mosque and several places of worship of other confessions.There is some other theory, but it is possible to combine both theories, according to which Serbia, especially Šumadija, was rich in timber, which, consequently, was the main building material, especially quality and worthy Oak that is still taking an important place in rural architecture.And all that with Churches & Monasteries-Taxi Serbia.

Belgrade Fortress, built on the white reef above the confluence of the River Sava and Danube, many times razed and rebuilt during the course of 16 centuries, is today a famous trademark of Serbia’s capital.

It was built somewhere during the long period between the II and XVIII century. Just as many armies, nations and conquerors that passed through these regions left some sort of a mark, in that same manner the walls of the Belgrade Fortress have many different layers, the ones made by Romans, Serbs, Turks, and Austro-Hungarians.More about Serbia at tripadvisor.com

Temple of St. Sava is located in Vračarski plato, it is dedicated to St. Sava, the founder of the Serbian Orthodox Church and one of the most important figures in the history of medieval Serbia. It is one of the biggest Orthodox churches in the world. It is beautiful white structure located in the street Krusedolska, just behind Slavija square. This temple was built in the town Vračar in a place where they assumed they were incinerated the remains of the saint by the Ottoman Turks in 1595, however it is one of the most modern temples since its construction began in 1985.

Construction was halted due to the outbreak of World War II and the bombing of Belgrade, followed by the time of Tito’s communist Yugoslavia, construction was only resumed in 1985. The interior height of the temple, from the floor to the top of its dome, is 65 meters, while the outside height with the cross is 79 meters. The temple has three choir galleries with capacity for 700 choir members each, as well as an observation gallery. The ground floor and galleries of the temple can house 10,000 people. Because of its dominant position in Belgrade’s cityscape, it represents the most monumental building in the city, walking around it as the entire plato has now been reconstructed and it is possible to enjoy a beautiful landscape.

Saborna Crkva was built between 1837 and 1840 by order of Prince Knez Miloš Obrenović, it is a richly decorated Classicist church with late baroque elements located Kneza Sime Markovica street in a wonderful neighborhood. The church is dedicated to St. Michael the Archangel and it was erected on the site of an older church dating from 1728. Saborna Crkva has been demolished and restored a number of times.

The interior is richly decorated and the treasury of the church is especially valuable with its collection of ancient icons and sumptuously adorned works of art in gold (dated from the 17th to the 20th century). Inside the church is possible to see also the tombs of the Serbian sovereigns Miloš and Mihailo Obrenović. Moreover in the churchyard are buried two outstanding figures of Serbian culture – Dositej Obradović and Vuk Stefanović Karadžić.

The Church of St. Mark is located in the centre of Belgrade’s Tašmajdan Park. It was built between 1931 and 1940 on the site of an old church from 1835. The Church was designed by the architects Petar and Branko Krstić. The style is Serbian-Byzantine and the plan of this temple is reminiscent of the architecture of the Gračanica monastery.

The south section of the nave contains the sarcophagus with the bones of the Serbian Emperor Dušan, moved here from his legacy monastery of the Saint Archangels at Prizren. Furthermore the church contains one of the richest collections of Serbian icons from the 18th and 19th century.

The Church of St. Petka Church is located in the Upper Town of Belgrade Kalemegdan Fortress. It was built on top of a spring that is believed to be miraculous, on the site of an old chapel built in 1867. The current chapel was built in 1937 to the design of architect Momir Korunovi?. Its interior walls and arches are covered with mosaics, created between 1980 and 1983 by artist ?uro Radulovi?.

When the foundations were being dug, numerous bones were found belonging to Serbian soldiers who had perished in the defence of Belgrade 1914-1915, which were transferred to a specially-built ossuary in the walls beneath Jakšić’s Tower.

5. Monastery of the Patriarchate of Pec

The Monastery of the Patriarchate of Pec is located at the very entrance of the Rugova gorge near Pec. The complex of the Pec churches is the spiritual seat and mausoleum of Serbian archbishops and patriarchs. The temple of the Holy Apostles was built by Archbishop Arsenije I in the third decade of the 13th century. He was also responsible for the painting of the church around 1260. Archbishop Nikodim built the temple of St. Dimitrije next to the northern side of the church of Holy Apostles between 1321 and 1324, while Archbishop Danilo II built the churches dedicated to Virgin Odigitrija and St. Nikola on its southern side. He also built the monumental parvis in the shape of a magnificent open porch in front of the western facades of the churches of St. Dimitrije, Holy Apostles and Holy Virgin Odigitrija. Churches & Monasteries

Ljubostinja is a Serb Orthodox monastery near Trstenik, Serbia. It was founded by Prince Lazar Hrebeljanović in 1388, just before the Battle of Kosovo.  Architecturally, the church, dedicated to the Dormition of the Holy Virgin, belongs to the Morava School. Its ground plan has the form of a trefoil with a dome resting of four free-standing pillars.The construction of this foundation of Princess Milica and Prince Lazar started in 1388-89. After the battle of Kosovo, when Lazar was killed, Milica became a nun, as many widows of the Serbian soldiers did the same. 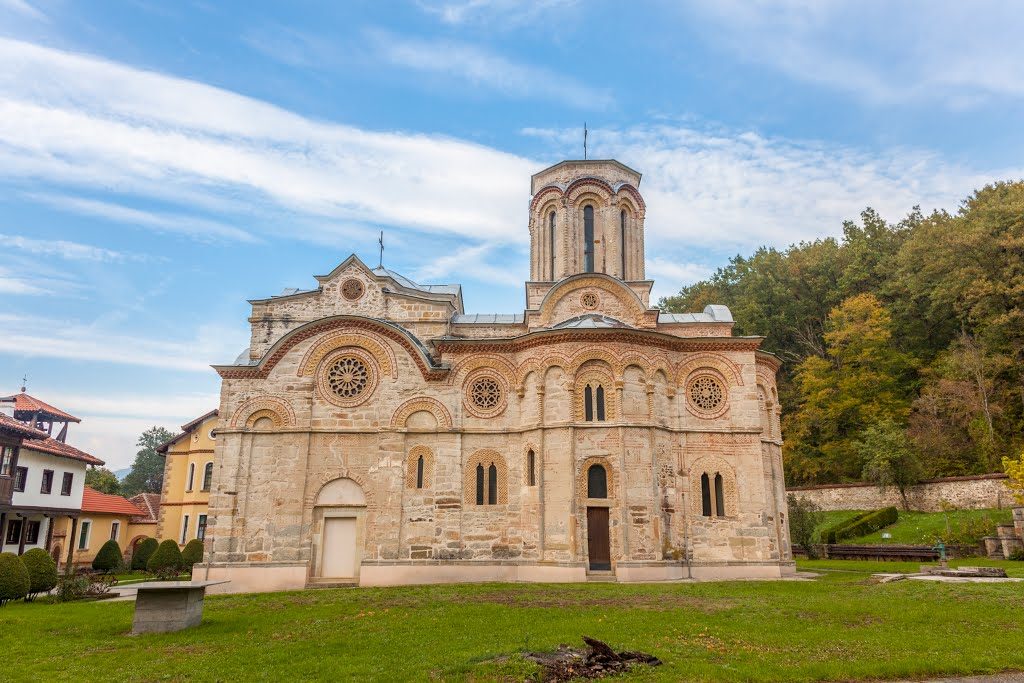 Manasija, also known as Resava (Serbian Cyrillic: ??????), is a Serb Orthodox monastery near Despotovac, Serbia, founded by Despot Stefan Lazarević between 1407 and 1418. It is one of the most significant monuments of medieval Serbian culture and it belongs to the “Morava school”. Immediately following its foundation, the monastery became the cultural centre of the Serbian Despotate. Its Resava school was well known for its manuscripts and translations throughout the 15th and 16th centuries, even after the fall of the Despotate to the Ottoman Turks. Churches & Monasteries 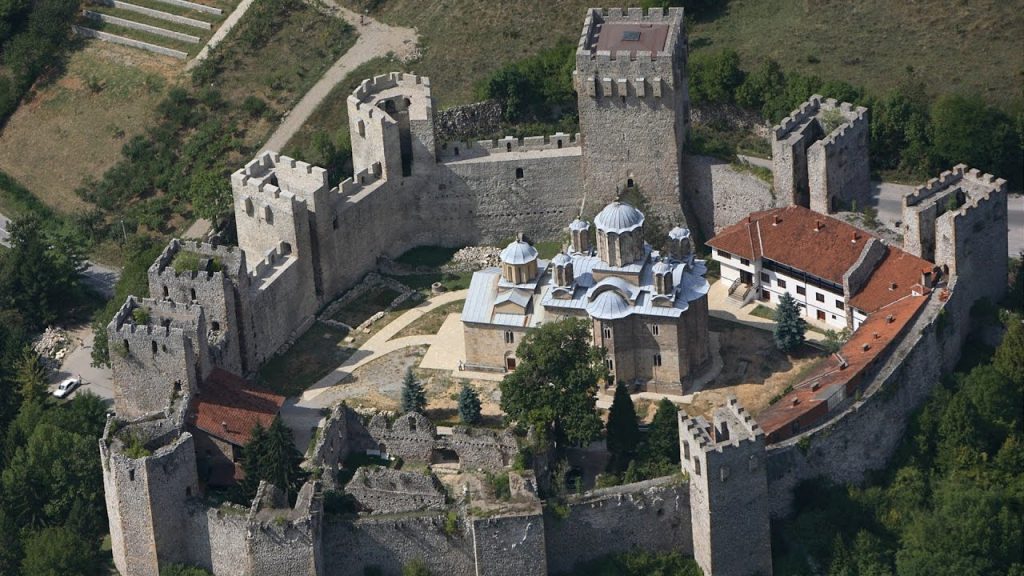 Built between in 1370. and 1380s, Ravanica is the famous Prince Lazar’s foundation, where he was buried after his death in the Kosovo battle. Since then, Ravanica has been a pilgrim’s destination and an important center of cultural activities and the Serbian people’s assemblies. The monastery has been assaulted and injured by the Turks several times, in 1386, 1398. and 1436. In the great war after the second siege of Vienna a number of monks got killed and the rest of them, in 1690, took the relics of the sainted Prince Lazar withdrawing, in front of the Turkish offensive. 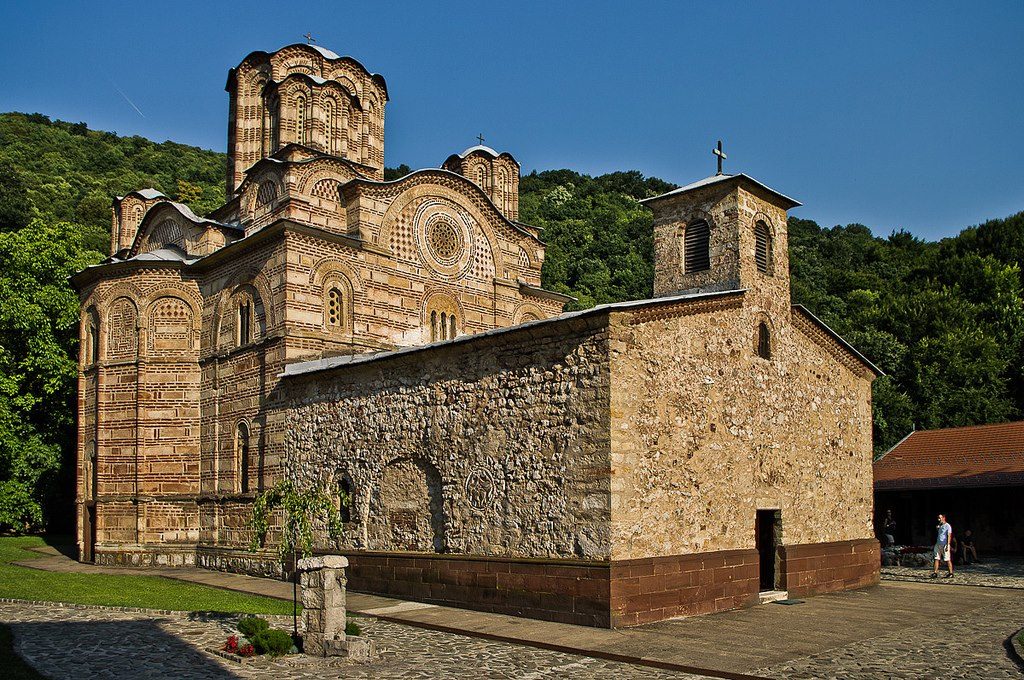